The Strate brothers hit 100 points on the ice

Twins Cody and Dylan Strate score big for the Saints 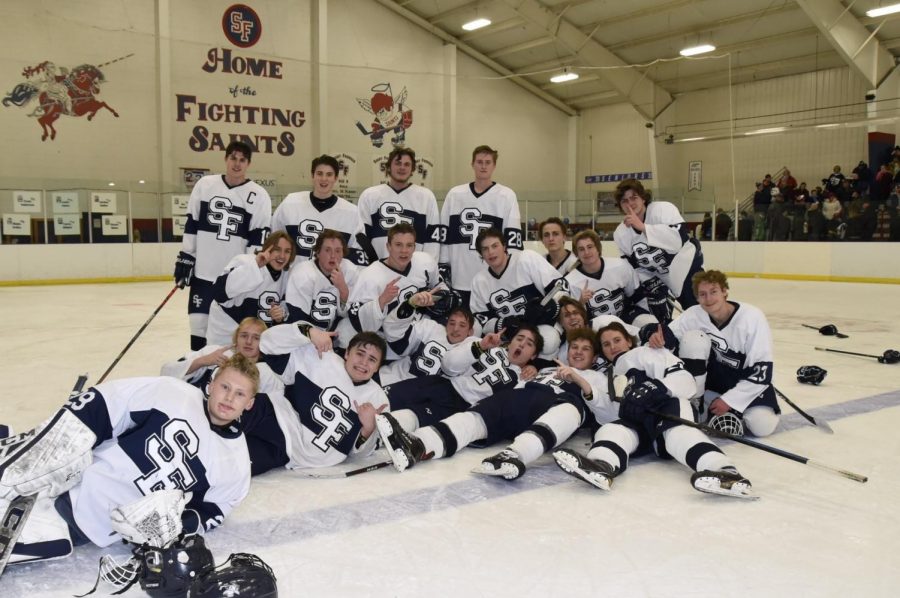 The Saints Boys Hockey team poses on the ice for a team picture.

This year the boys hockey team has had one of their best seasons yet. The Strate brothers have really stuck out this year as they are the top scorers on the team as juniors in high school.

They also each got their 100th point this season, and it just so happened that it was in the same game which was a huge accomplishment for the both of them. Next year they hope to bring even more to the team.

Dayne Mann, captain of the boys hockey team had nothing but good things to say about them, along with coach Schaff. The Strates have been playing hockey for 8 years now and have been at the high school level for 3 years.

“It was a little bit of an accomplishment to hit 100 points and it was pretty cool,” said Cody.”Coach gave me a big hug after the game. It felt pretty good.”

Cody also said the captains of the team (Dayne Mann and Jordan Haller) were very supportive.

“It was really cool and I even got a game puck after the game,” said Dylan.

He added that the support from his teammates and coaches after the game was a really great feeling.

“I would say both players are very gifted athletes,” said CoachTyler Schaff, “and they both bring a lot of emotion and their high skill level helps the team a lot.”

“They are a big contribution to our team,” he said, “and they play anywhere we need them.”

Both Strate brothers plan on playing hockey beyond high school.

“Unless another opportunity comes up where I can make bank like working on the stock market or something,” said Cody.

“Both of the Strates are natural athletes and Cody is a heck of a goal scorer,” Mann said, “and Dylan always knows where to find him on the ice anytime.”