Senior Jordan Haller returns to the sport he left behind 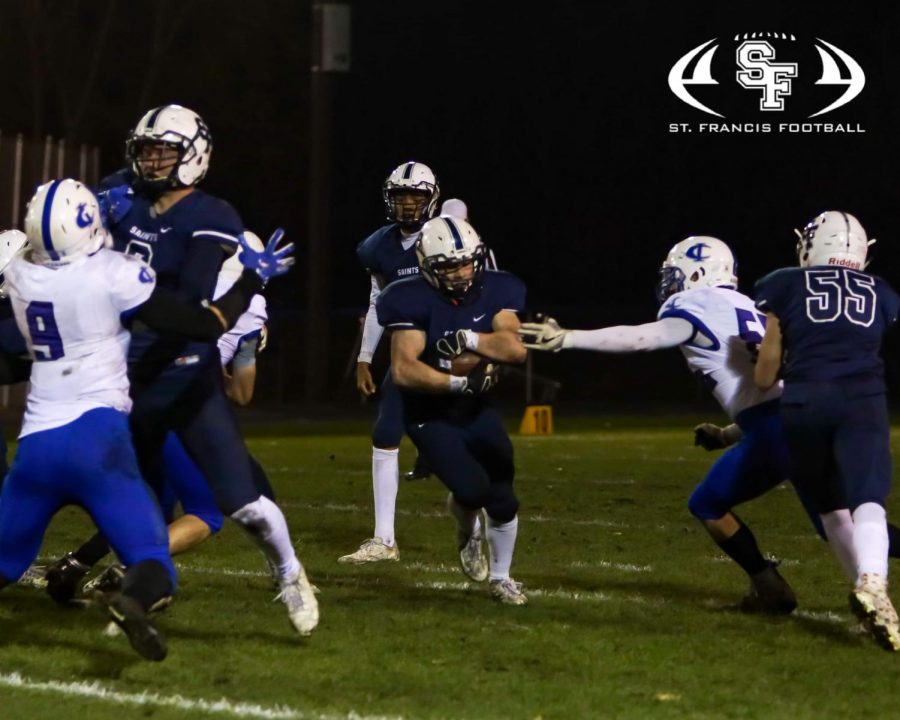 The Saints' Jordan Haller carries the ball low and tough in the first playoff game against Cambridge-Isanti. The Saints won 37-7.

I’ve played football since I was 9 years old and I’ve played with a variety of different kids and coaches. Most boys in the U.S. play football at some point in their young lives. Some stick with it and others leave the sport behind, but a select few come back to the sport and never regret it. Jordan Haller is one of those few.

He played from third to sixth grade, but then decided hockey was his sport and he left football behind. No matter how hard I tried all through Middle School and into junior year, I couldn’t get him to sign up.

After a shoulder injury from Hockey in a summer league game and the subsequent surgery, Jordan took weight lifting very seriously. He saw himself change. Then in his senior year, he decided to put himself out there and come back for one last season with his friends,who eventually turned into brothers. He came into the season not expecting to play or make an impact.

Surprisingly,  he made an impact from the start. In practice, Jordan ran hard and always gave the defensive players a good look. He eventually made his start against the Rogers Royals.

In an out-of-reach game, Jordan started getting carries, ran hard and broke tackles. After the game Jordan told Coach Swaggert, “That’s one of the best things I’ve ever done!”

Jordan has made an impact on the offensive side of the ball with good blocks, taking the other teams’ defensive end out so that Zach Graf can run the ball through the hole he creates. He is also great at running low and tough.

On a cold, windy Tuesday night in a playoff game against Cambridge-Isanti, Jordan stood in the huddle and awaited the call. The call was relayed to us, “Tight left, Dive check on one.” As we all prepared ourselves, our QB surveyed the defense and looked for the open gap. He gave his cadence “Blue 33, Blue 33.”

Jordan knew what he was doing and where he was going. As the linemen called their blocks, the ball was snapped, and Jordan came out of his stance low and took the hand off. On first contact he spun out of an arm tackle, stumbled back and smashed into another Bluejacket. All at once he fell ahead into the end zone. As I watched Jordan accomplish one of his goals for the season, I grabbed him by his pads and pulled him up along with the rest of the offense. We all slapped him on the back and cheered, celebrating his  big play.

In my opinion, he has all the keys to be a great fullback. He’s big and very strong, He wants to make an impact on the game and looks to become a bigger part of the offense than a normal fullback would. Football is perfect for a guy like Jordan – he’s explosive and fast. What makes Jordan such a fun player to watch, and play with is that he is playing this game for himself and the pure joy of the game.

It’s always inspiring to see someone try something new and succeed. Now Jordan looks forward to post-season play, after beating Cambridge-Isanti in the first round of playoffs. The Saints take on the Coon Rapids Cardinals in the Cardinal’s nest on Saturday, October 26th at 3:00 pm.