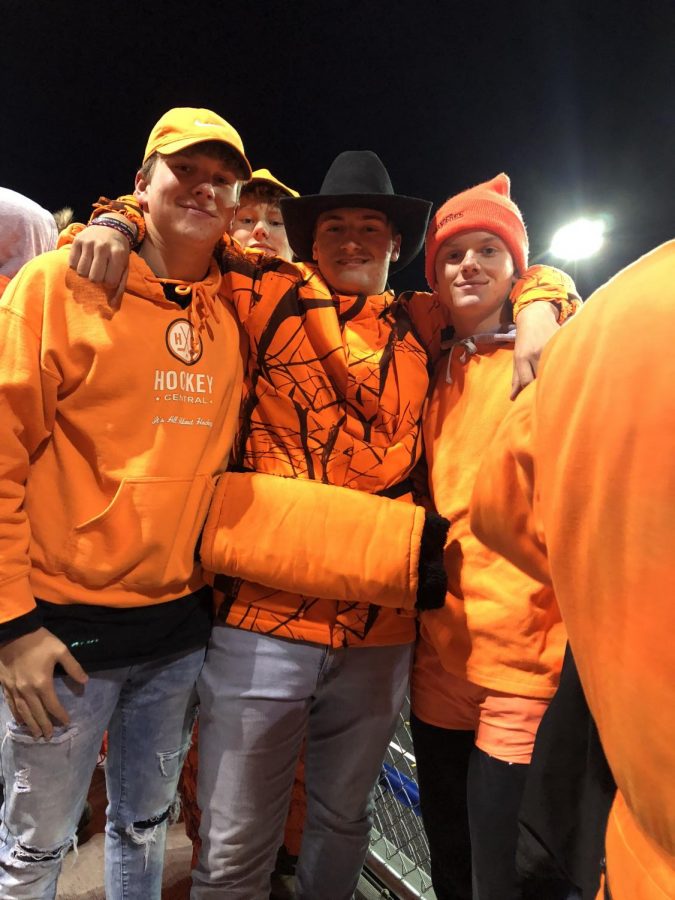 Superfans celebrated in the stands with their blaze out theme.

As the fall sports season comes to an end, senior athletes are understandably going to miss their high school experience, but there are some other students who are just as sad that it is their last hurrah.

Superfans at St. Francis have their own place in the stands, their own Twitter account and their own traditions. Each year there are always a few who stand out from the crowd.

Corey Wilmer has become a super superfan by creating chants, whipping up the crowds, and attending multiple events including football, boys and girls soccer and volleyball.

“My best memory’s gotta be Weston Sabby doing the roller coaster at half time,” said Wilmer.

Wilmer would lift Sabby into the air at football games and moved him around like a puppet. “Shaking him around was a good time.’

It took Sabby some convincing at first, but it ended up being worth it for him. After the crowd went wild, Weston even got a kiss on the cheek from Lydia Rzeszutek, for his participation.

Although Wilmer may be seen as the leader, he gives a lot of credit to his friend Brandon Johnson, who he thinks brought the most energy this year.

Some people, like Afton Olson, was nervous about Brandon, because he takes his job as a superfan so seriously. However, this year she admits he was a good leader.

“As much as I don’t want to say it,” said Olson, “Brandon was fun to have in the stands.”

She also said she remembers last year seeing all the seniors crying so it just makes her sad that it’s going to be her senior class this year.

Her best memory was beating Monticello just because it was a close game and The Saints got to celebrate after.

“It’s my senior season so it’s kinda sad,” said Wilmer, “but I’m just trying to live it up and make the most memories I can.”