When the show can't go on, connections are more important than ever 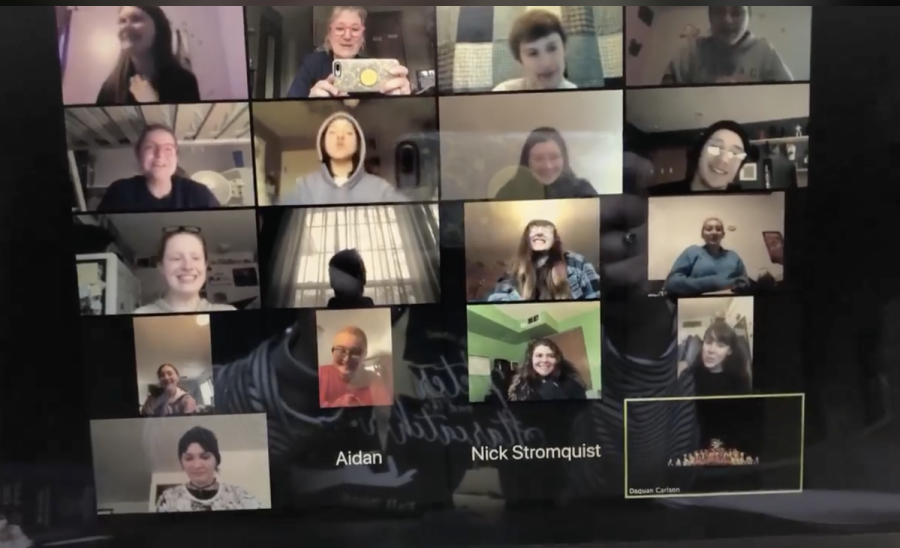 Theatre Students stayed in touch via Zoom during the school closure in spring due to Covid-19.

What should have leapt onto the stage hot off the presses at the end of April, the SFHS musical Newsies came to a screeching halt, like all spring activities and sports, after an extended spring break and shut down thanks to Covi-19 and a global pandemic.

Originally scheduled to run April 30 – May 3, Newsies tells the real-life story of the News Boy strike of 1899, where a group of young workers took on publishing giant Joseph Pulitzer in order to fight for workers’ rights.

“We were so excited for this production,” said director Glenn Morehouse Olson. “We were about two-thirds of the way done. All that we had left was to learn choreography and music  for a few more songs.”

The show was cast in February and they started rehearsals right away. About 80 students would have been involved in the production, including technicians, actors, dancers, singers, and pit orchestra.

“It’s very disappointing to lose this opportunity, especially for our seniors,” said Morehouse Olson, “but we know we weren’t alone. There were so many lost opportunities this spring.”

Morehouse Olson and the cast held a few Zoom meetings, including one where they brushed up on the first act of the show, still hoping to come back and perform.

“Once we realized that wasn’t going to happen, we did a few other things,” she said. “One really amazing opportunity we had was to work with playwright Adam Szymkowicz, who wrote the play we performed last summer in Scotland. He had written a new play for high school aged actors and wanted to hear a reading of it. We helped him out. Now, when the play is published, the St. Francis High School cast who helped him with the read-thru will be published in the front of the play.”

On June 6th, students had a Zoom awards ceremony, complete with a costume contest and Kahoot Trivia. They announced official awards and had a great time with the gag awards that have been a huge part of the evening in the past.

“It was really just good to see everyone’s faces and hear their voices again,” Morehouse Olson said. “These are difficult times, which makes staying connected with each other even more important.”