Looking up to my little sister 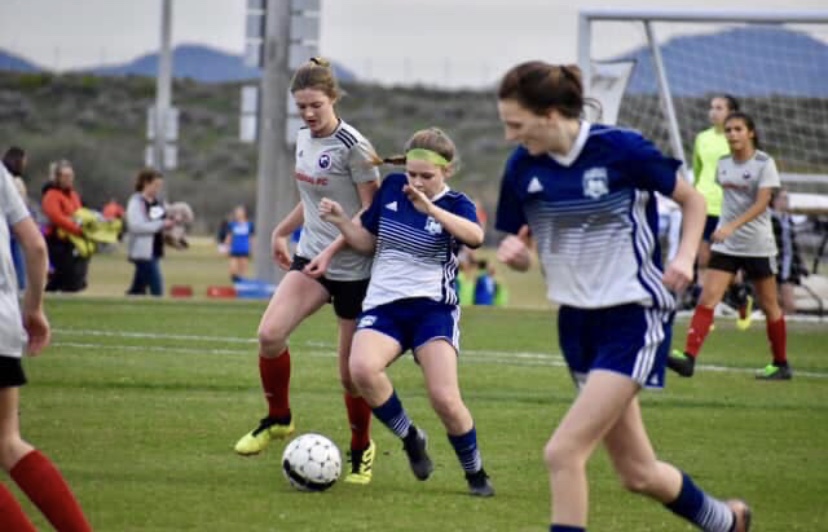 Sydney Olson plays in a soccer tournament in Arizona for her club team.

As the older sibling of a freshman in high school, I have found it interesting to look back at my own high school career through the eyes of my younger sister. As kids, all of my siblings played soccer, but my sister Sydney is the only one who stuck with it into high school. My older sister Maddie and I both turned to Hockey.

It has been eye-opening watching Sydney and her commitment to her sport. As a freshman, she now gets to play on the High School JV team, but she also plays on an elite soccer team that keeps her busy all year round.

“Being involved in sports all year round can be tough but adding school to the equations makes it a lot difficult at times,” said Sydney.

With Sydney on an elite team, I have seen first-hand all of the time she spends. I have even accompanied the family on out of state trips with her team. Last year they traveled to Arizona to compete in a tournament in February.

“ A lot of dedication and hard work is put into play on a team like that,” said Sydney.

One of her favorite memories from playing soccer has to do with play on the club team.

“During the game to win state, I saved a goal with my head which lead us to taking the state championship title home. The feeling was so surreal,” she said.

Sydney has dreams to continue her passion for soccer, with the hope of getting a scholarship to play with a college team, as long as that college has the major she’d like to pursue, which is orthodontia.

“With the support of my coaches, teachers, friends, and most of all family,” she said, “I have no doubt that I will get to the places I want to be in life.”

Being the older sister, it’s usually the younger one that looks up to you – but stepping back and looking at what my younger sister has accomplished, it really is heart-warming and I wish I would’ve found something I was as passionate about as she is for soccer.