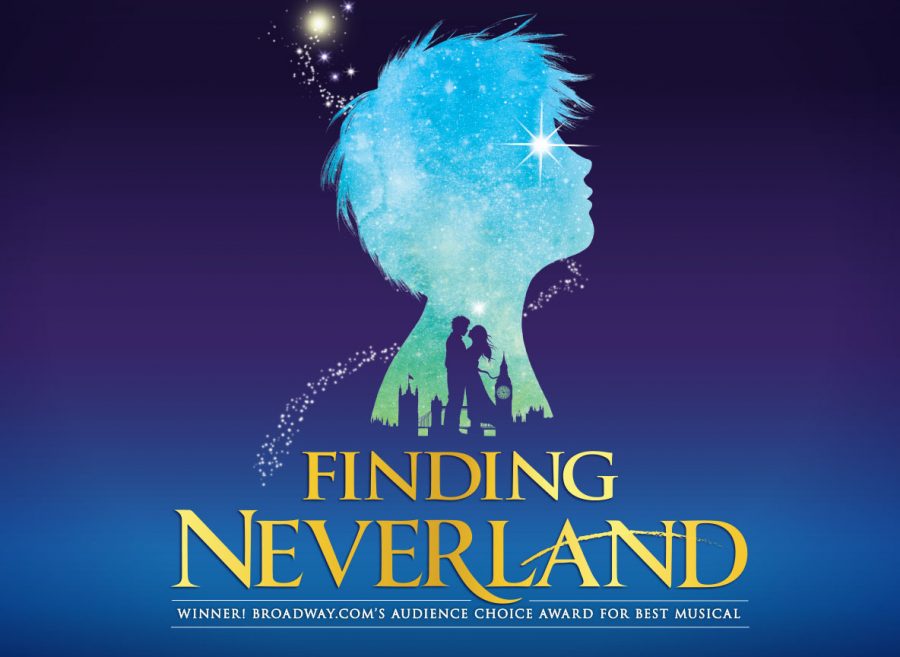 The theater is a magical place that brings life and fun to any story; and this musical certainly did not infringe upon that reputation. The first thing I noticed when I sat in my seat holding that Finding Neverland Playbill in my lap was the curtain. It was such a unique pattern of blue, red, pink , purple, and green with yellow tassels dangling down barely touching the stage, framed by the green and gold signature colors of Peter Pan. It was a perfect color scheme to for the childish, fun, adventurous musical that tells the story of how J.M. Barrie wrote the classic play, Peter Pan. This was just a hint of the technical brilliance that was yet to come.

The set changes were smooth and seamless with the help of the moving panels that advanced the setting to go from place to place, as well as the invisible floor tracks that were used to move the benches and light posts across stage. As one scene went up in the air as the lights dimmed, a completely different location replaced it. The story journeyed from an open park to a nursery in the blink of an eye. From costumes to scenery the color scheme of the show had almost muted colors, but not everything. The trees were bright green and the roses were a beautiful shade of red. This choice in colors brought me back to the London of 1902. That along with the projections moving on the front of the panels added a sense of magic to this already enchanting show; creating movement that caught my eye and helped tell the story.

In addition to the projections, the shadow play in this show was especially enjoyable. In one particular scene J.M. Barrie (Billy Harrigan Tighe) and Sylvia Davis (Lael Van Keuren) danced around the ghost light of his theatre while their shadows floated on the back wall so they looked like they were in their own world. As I was watched them dance, it hit me that this was where James got the idea of Peter Pan’s shadow being so important. I was absolutely blown away. Another spectacular shadow moment involved Captain Hook… but I don’t want to give too much away.

Finally, this ensemble cast was extremely precise. The choreography in the show was exaggerated to make it more dramatic. This was most evident with the serving staff. The butlers were adorable to watch. The way the had their chest out and chins up was just like the adults in old kids cartoons. Most of the choreography was like that in fact. It was as if the play were being played out in a child’s mind amplifying the ridiculousness of the adults. Incorporating the tick tock of the clock, human bodies became gears in the eerie “Circus of Your Mind” song, which contrasted with the ballet like movements of Peter Pan and the fantasy scenes. Every member of this cast from J.M Barrie’s dog (who was the inspiration for Nana) to J.M Barrie himself was an intrical part of the story.

From the moment the curtain rose to the final bows I was transported to J.M. Barrie’s journey through Neverland. As Sylvia teaches him, “Without the shadows there would be no light”. On this night the cast of Neverland certainly left the audience with enough light to brighten this dark world.