SFHS Theatre presents one of the premier productions of Jonathon Dorf's Declaration. 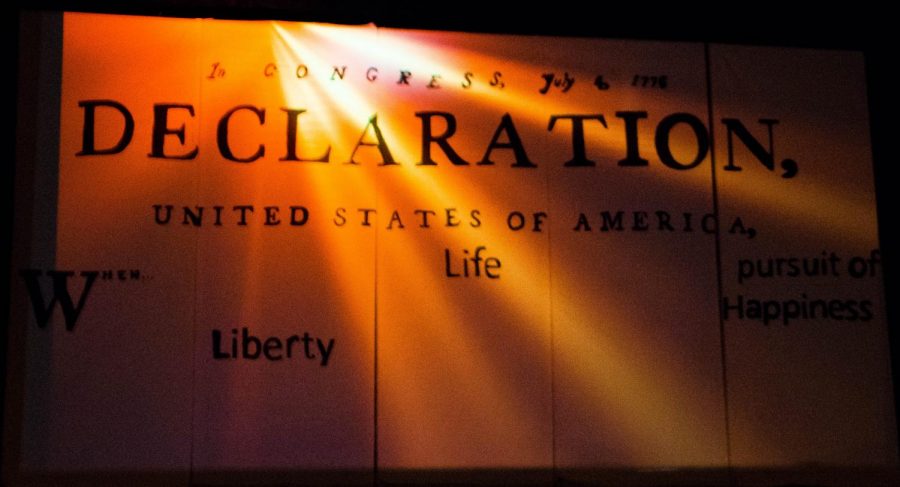 The backdrop of the One Act Competition Play - Declaration by Jonathon Dorf.

Every year the St. Francis theatre program puts on many phenomenal shows, but this year they decided to take on the serious topic of school shootings with their One Act cast.

This year’s show Declaration by Jonathan Dorf focuses on the “befores, durings and afters of a group of students whose school is yet another ground zero for a mass shooting,” as described on Dorf’s website.

“When I got the play from Jonathan Dorf (the playwright) it was one of the plays I could clearly see in my head and the subject matter at hand is very powerful and an important conversation starter,” said director Glenn Morehouse Olson.

Morehouse Olson has directed the MSHSL Competition One Act for 14 years. “So every year I choose ensemble pieces that will give a lot of students a chance to participate and I’m also looking for things that have meaning,” said Morehouse Olson.

The One Act competition has very specific rules and regulations that include: the time being under 35 minutes, a limit of 20 students, and the set has to fit within a 10×10 box. Morehouse Olson is very particular about the audition process as well as the actors and technicians she chooses to be in her One Act.

St. Francis is fortunate enough to have Language Arts Teacher and certified one act judge Mark Thul within its school district. It gives them a good insight on what to work on and how to improve their show. While preparing for competition, Morehouse Olson invited Thul to come critique a rehearsal.

“We’re looking for the ability and skill of the actors to create the message and give an overall effectiveness” said Thul.

One of the most interesting parts in Declaration is that the audience never gets to see the shooter because the play is written so the main focus is no longer on the shooter but on all the victims of the shooting.

Simon Luckow, the Vice President of the local thespian troupe, is a well-known leader within the program.

“It’s unfortunate that it is a common occurrence in our country today but it (the play) just talks and discusses all the viewpoints and sides of the issue” said Luckow.

Luckow has many strong feelings about the relevance of the One Act in today’s society and hopes that it will have a strong impact on not only the youth of our society but with in the older generations as well.

Despite One Act being able to only have 20 students within the cast, the theatre program has many more shows and always accepts more students no matter who you are.

“Theatre is a place for everyone,” said Morehouse Olson